Emerging Facts on Chronic Consumption of Aspartame as Food Additive


Low caloric sugars of intense sweetness are world widely used as artificial sweeteners. Aspartame, being a non-nutritive sugar, acts as a sweetening agent and flavour enhancer which leads to the replacement of many nutritive sugars. The origin of aspartame was serendipitous, but it has been into huge controversy since then related to its toxic effects that come along with its excess sweetness. It is quite evident that aspartame has its toxicity due to its metabolites which are - phenylalanine (50%), aspartic acid (40%), and a small amount of methanol (10%). The present review entails in detail the mechanism and the harmful effects of metabolites based on various studies carried out on aspartame for long. According to World Health Organization, the acceptable daily intake of aspartame is 40 mg/kg bw except for phenylketonurics. Toxicity of aspartame and its metabolites is controversial but its chronic consumption as a food additive is considered treacherous. Hence, it is assumed as unsafe for human use if ingested on regular basis. The present review focuses on the collective data signifying adverse events associated with aspartame linking nephrotoxicity, neurotoxicity, reproductive abnormalities and apoptosis to aspartame usage. 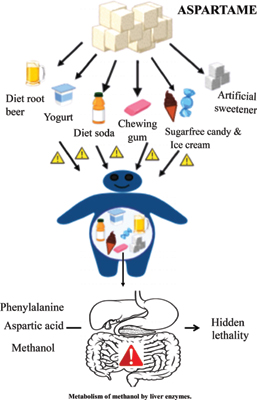