Butyrate: A Review on Beneficial Pharmacological and Therapeutic Effect


Background: Short-chain fatty acids (SCFAs), generally acetate, propionate along with butyrate, are aliphatic organic acids formed in the gut mucosa through bacterial fermentation of mostly undigested nutritional carbohydrates, again to a minor degree by natural and dietary proteins, such as mucous and shed epithelial cells.

Methods : Many sources were used to collect information about Butyrate, such as Pub med, Google Scholar, Pubmed, Scopus and other reliable sources.

Endogenous butyrate formation, absorption, and transportation by colon cells have now been well acknowledged. Butyrate exerts its action features by way of appearing as a histone deacetylase inhibitor, even signaling through a few protein receptors. Lately, butyrate has received special consideration for its favorable result on intestinal equilibrium and also energy metabolism. There is a growing interest in butyrate as its impact on epigenetic mechanisms will result in much more certain and also efficacious healing techniques for the prevention and therapy of various diseases that range from genetic conditions to other body disorders.

Conclusion: With this assessment, we compile the existing information on the attributes of butyrate, particularly its potential effects and also mechanisms involved in cancer, inflammation, diabetes mellitus, neurological and cardiovascular disorder. 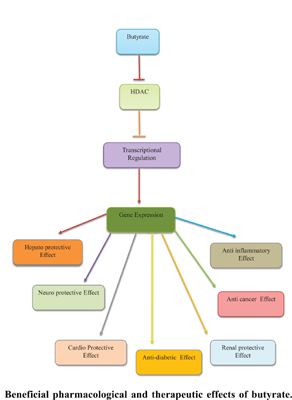