Background: Soybean is rich in dietary fibers; consequently, soybean ingestion considerably increases the breath level of hydrogen molecules via anaerobic colonic fermentation. However, the influence of cooking methods on this effect, which can affect the overall health benefits of soybean, remains unknown.

Objectives: The aim is to examine whether different methods of cooking soybean affect the colonic fermentation process.

Methods: Nine healthy adult volunteers participated in the study; they ingested either roasted soybean flour (kinako) or well-boiled soybean (BS). Differences in their breath components were compared. Both test meals were cooked using 80 g of soybeans per individual. After a 12 h fast, the participants ate the test meals, and their breath hydrogen level was analyzed every 1 h for 9 h by using a gas chromatograph with a semiconductor detector. In addition, particle size distribution and soluble/ insoluble fibers in the feces were examined.

Conclusion: Cooking methods alter the composition of non-digestible fibers in soybean, and this can result in the lack of fermentative particles in the feces, thereby causing alterations in the breath level of hydrogen via colonic fermentation. 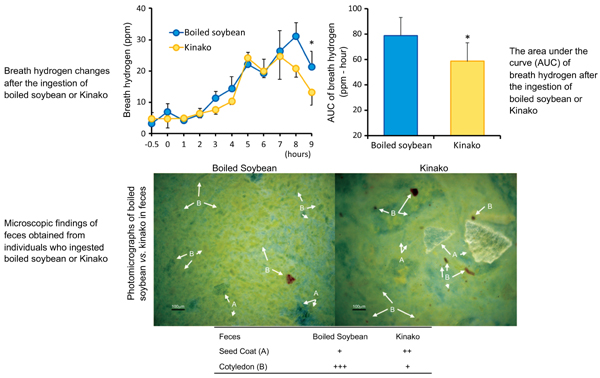