Optimizing Modifiable and Lifestyle-related Factors in the Prevention of Dementia Disorders with Special Reference to Alzheimer, Parkinson and Autism Diseases


Dementia is a syndrome and an umbrella term that encompasses Alzheimer, Parkinson and autism diseases. These diseases are by far the most common cause of dementia; therefore this investigation will chiefly include these disorders, with a limited discussion of few other disorders related to dementia. Alzheimer’s disease (AD) is characterized by the accumulation of cerebral β-amyloid plaques, tau proteins and memory loss; Parkinson by the deterioration of brain cells which regulate the movement of body parts and produce dopamine; and autism by abnormalities of social disorder and difficulty in communicating and forming relationships. Alzheimer’s disease and cognitive impairment in dementia are age-related and manageable only with early diagnosis and prevention. Data based on several decades of research has shown that the major factors responsible for the induction of inflammation in dementia and many chronic diseases are infections, obesity, alcohol, radiation, environmental pollutants, improper nutrition, lack of physical activity, depression, anxiety, genetic factors, and sleep deprivation. There are some studied preventive measures for dementia including continued physical activity and consuming predominantly a plant-based Mediterranean diet comprising olive oil and foods containing flavonoids and other phytochemicals having strong antioxidant and anti-inflammatory properties and along with management of chronic conditions. 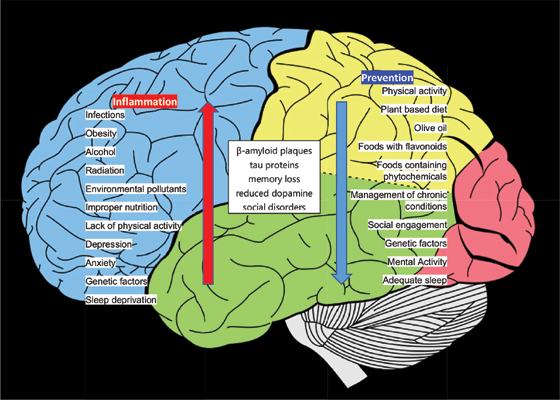