Results: The review showed that carcinogenicity of PAHs varies from the potent to moderately carcinogenic PAHs which include 3-methylcholanthrene, Benzo[a]pyrene, dibenz[a,h]anthracene, 5-methylchrysene, and dibenz[a,j]anthracene, whereas benzo[e]pyrene, dibenz[a,c]anthracene, chrysene, benzo[c]phenanthrene and fluoranthene are relatively weak or inactive carcinogens. Cooking processes have been found to be a major source of PAHs in foods. Although, PAHs can also be formed during curing and processing of raw food prior to cooking, several researchers in recent years have shown that the major dietary sources of PAHs are fish and meat especially where there is high consumption of meat cooked over an open flame. Several procedures and methods have been developed recently to assess and detect PAHs in foods and more recently, bio-monitoring procedures have also been developed to assess human exposure to PAHs. Numerous organizations such as the United States Environmental Protection Agency (U.S. EPA), the International Agency for Research on Cancer (IACR), the Scientific Committee on Food (SCF), the Joint FAO/WHO Expert Committee on Food Additives (JECFA), the International Programme on Chemical Safety (IPCS), and the European Food Safety Authority (EFSA) have been involved in evaluating the occurrence and toxicity of PAHs.

Conclusion: Conclusively, taking into consideration the sources of PAHs generation, adequate process and quality control of the processed foods could be a veritable mean to reduce PAHs ingestion in foods. 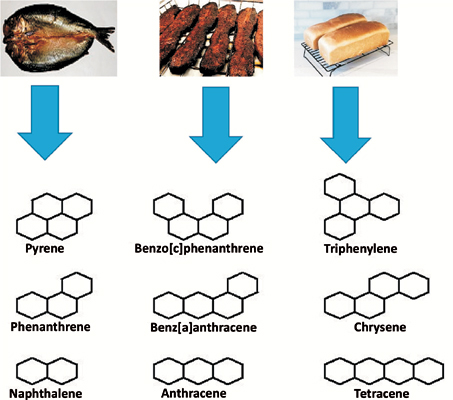